This report prepared by Mainstream details the extreme economic policies proposed by the Labour Party. This includes their spending plans that are likely to mean soaring taxes for all, not just the rich. The report has been endorsed by former Labour Party Shadow Chancellor, Chris Leslie.

He warns that Corbyn’s Labour could mean higher council tax, extra taxes on pensions and other tax changes. Leslie, who served as a Minister under Tony Blair and later served as Treasury spokesman and Shadow Chancellor, calls on Labour to be honest on how their spending plans will mean taxes going up for everyone.

He writes in his foreword to the report: “A general election ought to be a moment for those advocating ‘radical’ reform to level with those who will cover the costs of such changes.” He goes on to say that, “if we are to assume today’s Labour leadership accepts money does not grow on trees – and that can sometimes feel like a big assumption – then at some point there must surely be clarity on how their plans will hit taxpayers across the UK.”

The report details how The Labour Party has left the door open to billions of pounds worth of tax rises on ordinary people. Additionally, it sets out how new or reformed property taxes under a Labour government could hit those of average means. Lastly, the report highlights that John McDonnell has repeatedly said that he wants to fund additional public services out of “general taxation”.

This report prepared by Mainstream lays bare the violent views of the man tipped to be Labour’s next leader – revealing shocking new evidence of John McDonnell’s threatening use of language against MPs and support for IRA terrorism.

The research reveals how, at the height of the Troubles, McDonnell praised IRA terrorists as “freedom fighters” and called for a campaign to release those he viewed as “prisoners of war”.

And it contains fresh revelations of how McDonnell – who has spoken about assassinating, lynching and garrotting political opponents – once revealed he had to “restrain” himself from physically assaulting politicians he branded “bastards”.

The research charts the firebrand’s rise from hard-left backbencher to frontbench Shadow Chancellor. And it catalogues his incendiary use of language throughout his political career including his praise for a mob of violent rioters as “the best of our movement” and his incitement of activists to “resist in every form possible”.
The study also catalogues the Shadow Chancellor’s use of violent and abusive language against female politicians – including his infamous comments about lynching then Employment Minister Esther McVey and going back in time to assassinate Margaret Thatcher – as well as comments about garrotting and slapping opponents.

Corbyn, McDonnell and the IRA: A History of Extremism

This report prepared by Mainstream lays bare the full extent of the Labour leader’s links to those who backed violent republicanism. It shows how Corbyn and his closest ally, shadow chancellor John McDonnell, were linked to Sinn Fein. It reveals new evidence that Corbyn was strongly linked to an infamous newspaper editorial published shortly after the Brighton attack, which claimed that “the British only sit up and take notice when they are bombed into it.” The dossier reveals new details about Corbyn’s controversial Parliamentary meeting with convicted IRA terrorists just days after the horrific attack. It shows how, over two decades, Corbyn used his position as an MP to promote the violent republican cause during the height of the Troubles and it catalogues his damaging political intervention, as other politicians with a genuine interest in peace worked to reduce conflict in Northern Ireland.

The report comes as over 30 family members of people killed and people themselves injured in attacks sent a letter urging Jeremy Corbyn to directly condemn the terror campaign waged by the IRA throughout the 70s and 80s and call on him to “apologise for a career spent giving succour to violent republicanism when you should have been denouncing it.” 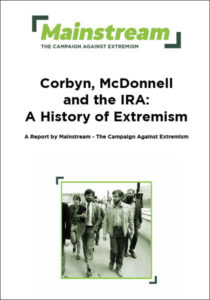 Mainstream will promote respectable and responsible politics wherever we can, and oppose extremism – wherever it comes from. We encourage everyone who wants to support our country’s mainstream values in political and public life to join us.

Help us fight extremism in politics and stand up for mainstream values.